Trial: Fully-featured (only permits 10 files to be renamed at once).

A Better Finder Rename (ABFR) is one of the staple utilities known by mostevery long-time Macintosh user. A perfect tool for expertly managingfilenames, its large selection of conditions for choosing and modifyingportions of filenames (or the entire name) makes it a must-have for anyonewho is the least bit concerned about file organization on their computer.

There’s almost no end to the possibilities of renaming actions.

The last time ATPM looked at A Better Finder Rename, it was April 1999and version 1.7 had justbeen released. To me, even those early versions seem powerful enough tohold their own against popular utilities of today. Yet, ABFR just keepsgetting better, offering increasingly creative ways to both isolateexactly which files you wish to rename and to specify exactly how torename them.

Fast-forward to November 2005, and ABFR 7.0 has undergone a completerewrite as a Cocoa application. One of its most anticipated new featuresis the ability to combine several rename actions into a single step.

Version 7.3 came with an alternative to the multi-step feature, whichshould be of benefit for paranoid types who would rather do just onestep at a time. There’s now an Apply button to perform a rename actionand remain in the ABFR application, permitting you to immediately set upa new action.

The instant preview window has also seen big improvement. It can now bedetached and resized from the default drawer configuration, and you candrag and drop additional files from the Finder, adding them to therenaming session. Curiously, even though there is a button to removeitems from the preview window, you cannot drag them away in the samemanner that you can drag them in. Poof, anyone?

A prior version of ABFR added the ability to work with MP3 and AAC audiofiles. If your audio files are properly tagged with ID3 information,ABFR can extract that information for renaming functions. For example,when iTunes is managing your library automatically, the filenames areusually just the song titles, which are inside a folder that is namedfor the album. Those album folders live inside yet another folder whichis named for the artist. Suppose you want to copy a handful of songsfrom various albums to your Desktop, then burn them to a CD with nofolder structure. ABFR can read the ID3 tags to give all the song filesa name such as Artist_Album_Song.mp3. You can choose one ofthe filename presets or build your own.

ABFR can also look at date and time information from the EXIF data indigital photos and add it to filenames, or create numbered filenamelists based on this data. Support for Adobe’s Digital Negative (DNG)format and experimental support of two new RAW formats when used underOS X 10.4 was added early this year.

Geeks…uh, I mean, power users…will appreciate the support of regularexpressions. Let’s be honest here—you either know how to use regularexpressions or you don’t. Since I don’t, the best I can do is suggestyou take a look at what ABFR’s Web page says about it.

Another boon to advanced users is the ability to choose one of four waysin which the technical act of renaming is performed. The default “Ultra-safe Finder mode” is thesetting to leave for most circumstances. Other modes include Cocoa mode,which is much faster for huge renaming actions, and Unicode mode, whichuses the Carbon APIs.

Finally, ABFR features tools for creating time-saving workflows. Thesimplest workflow function is to create a droplet upon which you canrepeatedly drag files to perform common rename actions. Advanced userscan set up standardized names in another application such as BBEdit orMicrosoft Excel, export them to a text file (plain or tab-delimited),and use these lists to manage batch file renaming.

ABFR is solid and reliable. Even the safe rename mode is very quick.It’s had a long time to mature into the indispensable tool it has provenitself to be. If you had asked me ten years ago if the first versions ofABFR could be any better, I’d probably have answered, “I don’t see how.It’s already amazing.” Yet, Publicspace has continually proven there’salways something that can be better. There’s probably already a goodlist of rename action improvements and additions of which I wouldn’thave dreamed. That said, I do have two thoughts on usability.

If you’re using both the multi-step drawer and the instant previewdrawer at the same time, the interface is awfully wide. Sure, you candrag these drawers closer, but they then become a bit too narrow to beuseful, especially the preview drawer. As stated earlier, you can detachthe preview drawer and move it elsewhere, though I happen to likedrawers and the ability to keep an application’s interface tiedtogether. Perhaps an optional setting to have the preview drawer comeout the bottom instead of the right side is worth consideration.

My other thought concerns the menu of rename actions, seen in the firstscreen shot above. While I am definitely not accusing ABFR of featurebloat, it can sometimes take a moment to scan through the list to findwhat I’m looking for. As you can see in the screen shot, the action menulist is nearly as tall as the entire vertical resolution of my TitaniumPowerBook.

The solution may be something I’ve not even considered, but ideas thatcome to mind include the introduction of some hierarchy in the actionmenu and/or pruning preferences so that the list isn’t populated withactions for which some users may never need.

While these two issues are a hit against usability, neither affectsfunctionality in any way. The multi-step drawer usually isn’t needed anddoesn’t have to be out, and there is at least a small bit of grouping inthe action list. A Better Finder Rename is definitely a tool that canbenefit anyone. 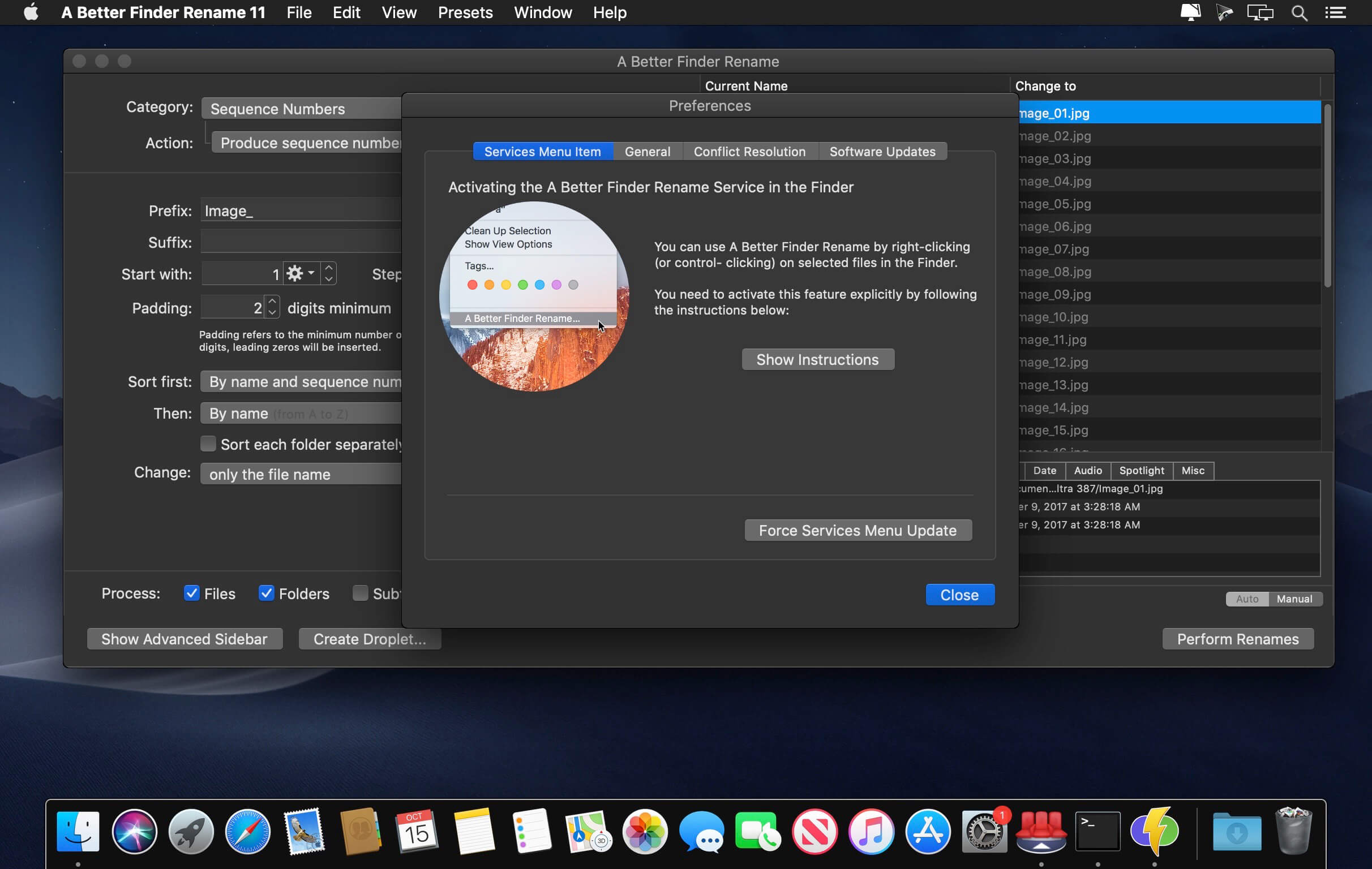 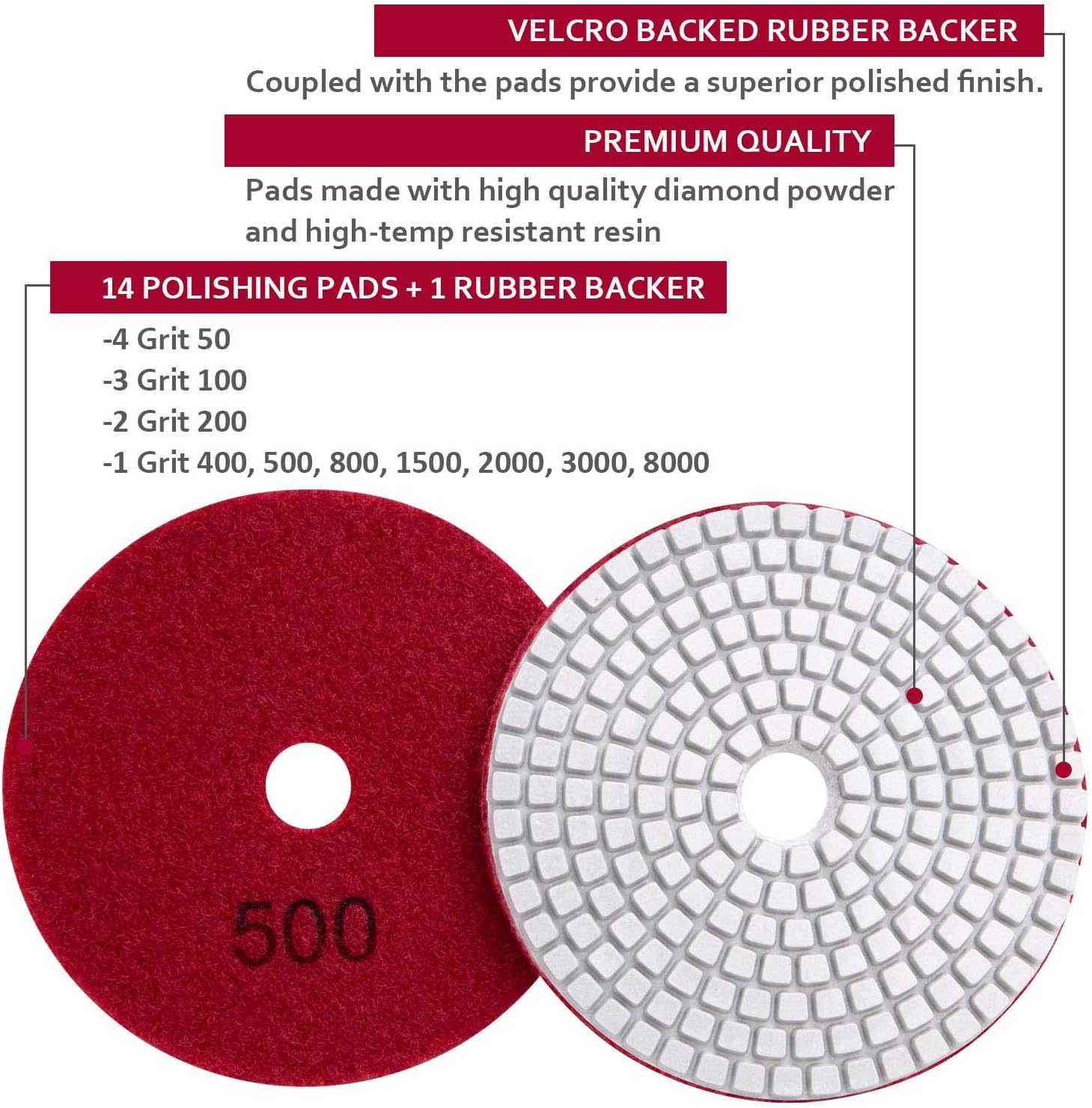 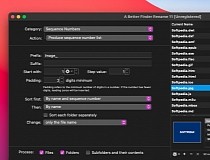 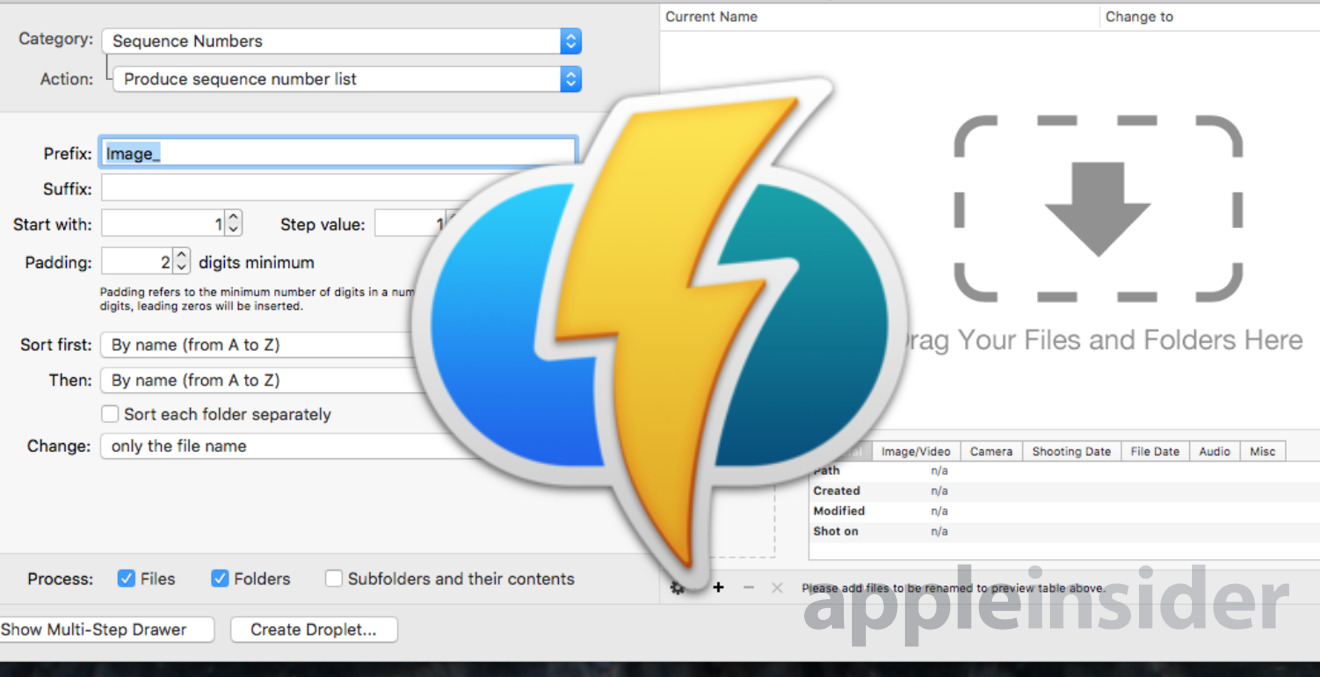